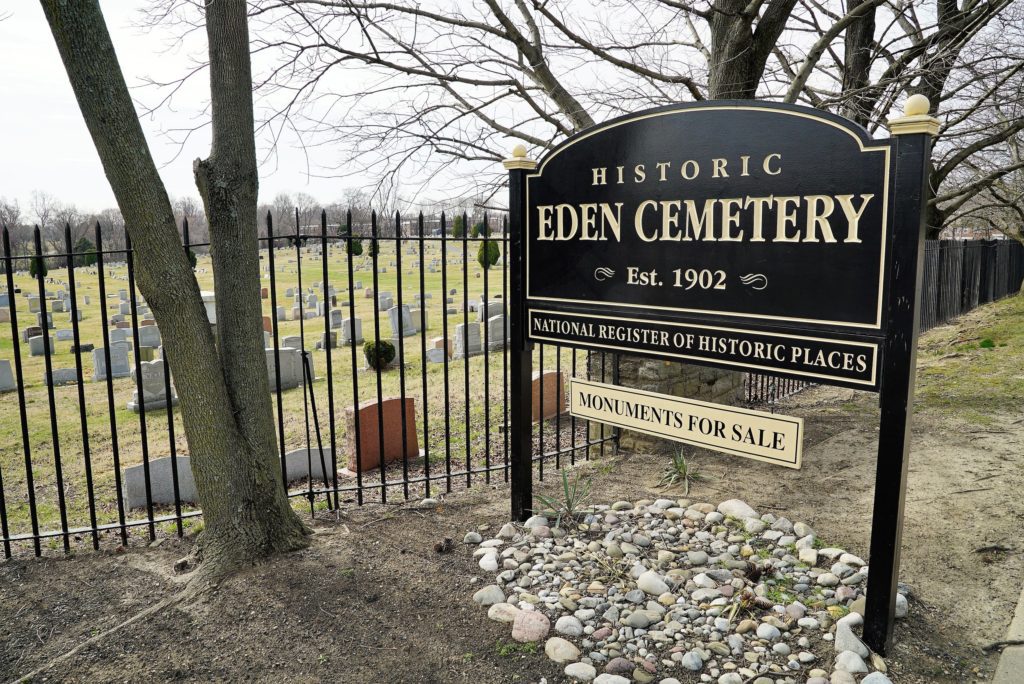 Eden Cemetery opened in 1902 in Collingdale, PA, (adjacent to Darby), on a parcel of the original Bartram family farm in Pennsylvania, dating back to 1685. Eden remains the country’s oldest continuously operating Black-owned cemetery, dedicated to preserving memory and cultural continuity.

The Eden Cemetery Company was organized at the beginning of the 20th century to provide a sanctuary in the Philadelphia area where African Americans could be buried with dignity and respect. Following forced closure of many important historic burial sites, particularly Lebanon and Olive Cemeteries in the city, and new ordinances that effectively prohibited the creation of new African American cemeteries within city limits, Eden provided a site for new burials and for reinterment of thousands of earlier burials.

In 1903, burials were relocated to the cemetery from Lebanon Graveyard and from the Stephen Smith Home for the Aged and Infirm Colored Person’s Burial Ground, both in Philadelphia. Twenty years later, additional remains were reinterred from Olive Cemetery.

Eden, a proud member of ASALH – the Association for the Study of African American Life and History, is part of the Pennsylvania Hallowed Grounds, the National Underground Railroad Network to Freedom, and is listed on the National Register of Historic Places.

to register for the tour. The cemetery is at 1434 Springfield Rd., Darby, PA 19023. Instructions will be forthcoming on exactly where to meet. Participants are encouraged to drive if possible as the cemetery is quite large and hilly. When emailing, please indicate whether you will need a ride or could offer a ride so that we can arrange carpooling.

The tour is complimentary AND an anonymous APT member has offered to match member donations up to $200 for Eden Cemetery’s Legacy and African American Memory digitization project. As APT is paying the guides and we are touring Eden Cemetery for free, this member was moved to support the cemetery’s efforts to preserve history. Any amount is welcome. The donations will be made on Eden Cemetery’s Go Fund Me page which is public, so it will also be good exposure for our association.

Eden is raising $75,000 toward the conservation, digitization, and preservation of its records. These records are a bedrock for research and interpretation of important stories of national and local African American history and cultural heritage. Protecting these historical records preserves legacy for future generations.

This is a rare opportunity to see an amazing historic site with one of APT’s most knowledgable and charming guides. Sign up today!