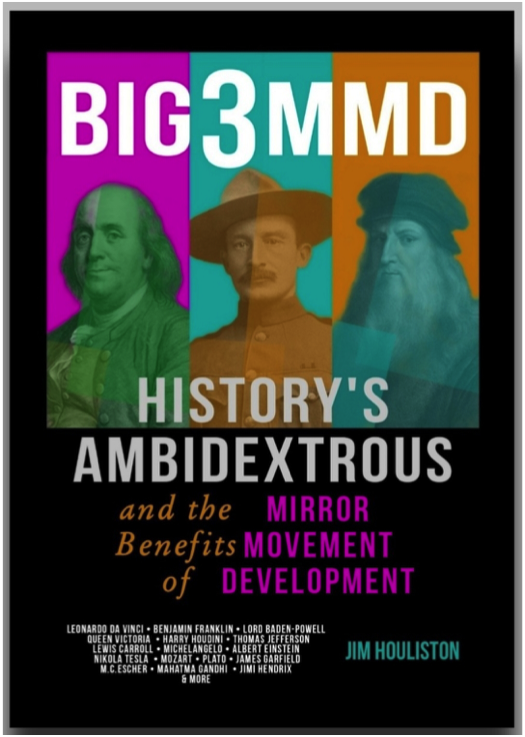 On Tuesday January 24 at 7 pm, the Association of Philadelphia Tour Guides (APT) will hold its first book club meeting of 2023, on zoom. The featured book selection is BIG3MMD: History’s Ambidextrous and the Benefits of Mirror Movement Development written by APT’s own Jim Houliston. It covers the history and science of mirror movement development (MMD) as the world’s first modern biscriptal book, written in both traditional and mirrored script.

What Made Benjamin Franklin’s Brain SO Different? For 30 years, Benjamin Franklin worked as a printing composer. This job, which Franklin claimed being “uncommonly quick at”, provided lots of opportunity for mirror reading since letters in a colonial printing press are mirror-cast. After work, Franklin would go home and read books in the traditional direction. According to neuroscience, this practice of both mirrored and traditional reading together would have made Franklin’s brain abnormally symmetric, due to the symmetric blood flow required for both right-to-left and left-to-right reading.

In 1779, Benjamin Franklin wrote an essay to educators titled, “A Petition of the Left Hand.” This essay creatively states that both hands are designed for equal use and that we should teach kids to develop them equally. This was also the same year that the school Franklin started 30 years before became the University of Pennsylvania.

Our 3rd U.S. President, Thomas Jefferson, may have been inspired by this essay and his relationship with Franklin to spend 40 years of his life developing dual-dominance (aka, ambidexterity) after an initial need for physical rehabilitation from a broken right hand.

Read the book and join us for the discussion – you’ll be wanting to practice ambidexterity yourself! Anyone with an interest in the book is welcome; participants do not have to be members of APT. No registration or payment is required. Please come prepared to discuss the book.

Association members will receive the zoom link in the APT email the week of the book club. Those who are not members should contact

a day or two before the event to get the link.